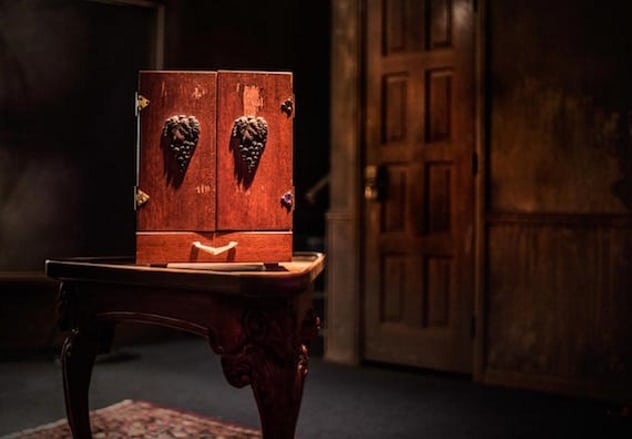 The Dybbuk (or Dibbuk) Box is a wine cabinet said to be possessed by an evil spirit referred to as a dybbuk. The box remains in the possession of antique collector Kevin Mannis, who bought it from a woman who said it was owned by her grandmother. Mannis opened the box after buying it. There wasn’t much inside, just a few curious items, including a candle, a wine goblet, and two locks of human hair.

However, someone or something ransacked Mannis’s shop the same day he opened the box. It definitely wasn’t a thief because nothing was stolen. The store clerk also reported that the light bulbs mysteriously broke, and she heard someone cursing. Mannis himself noted that the store smelled of jasmine flower.

Mannis finally put the box up for sale, but the buyer soon returned it over complaints that it contained something evil. Unable to rid himself of the box, Mannis just kept it in his basement. He soon started complaining of seeing ghosts in his home. Curiously enough, visitors also complained about the same thing. Mannis also had nightmares in which he was beaten and would often wake up with scratches and bites from the beatings.

Mannis finally sold the box to Iosif Nietzke, who bought it for $140 in 2003. Like the rest, Nietzke, too, soon started complaining of mysterious events in his home. He reported objects mysteriously moving around his home and the lights suddenly going on and off. He also sold the box, and the latest buyer, Jason Haxton, complained of excessive tiredness and unexplained rashes. He added that he coughed blood and that his mouth tasted of metal. He visited Jewish rabbis to calm the spirit inside the cabinet before putting it away. In March 2017, Ghost Adventures host Zak Bagans acquired the Dybbuk Box to be displayed in his museum in Las Vegas.

10 Of The Largest Animals We’re Glad Are Extinct

Mind Health Fortune - September 8, 2018
0
Science
There's various reasons as to why animals go extinct, it's generally due to human intervention in more recent years. From devastating rainforests and other ecosystems with climate change to building homes, our animal kingdom is shrinking more and more every year. Disease, epidemic, and...
Read more